Tips To Prepare Your Home For Spring

Spring is less than a month away! Pretty soon, birds will be chirping, flowers will be blooming and the sunshine will be shining! Is your home ready for the season change? Take a look at our 5 tips to prepare your home for spring! 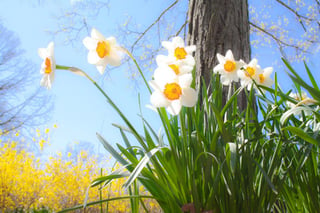 1. Fill The Low Spots
Find the low spots in your yard and fill them with compacted soil. Spring rains can cause yard flooding which can lead to foundation damage. Also, when water collects in these low areas, it creates a breeding ground for insects (and no one wants those mosquitos swarming around!)

2. Move Firewood
If you stored firewood near your home during winter, you need to remove it. Firewood should always be stored at least 2 feet away and 18 inches off the ground.

3. Inspect Concrete
Inspect exterior concrete slabs for cracks. All exterior slabs (with the exception of pool decks) should drain away from the home’s foundation. Fill cracks with concrete crack filler or silicone caulk, power wash, and seal.

4. Check Faucets
Check the exterior hose faucets for freeze damage. Turn the faucet on and place your thumb under the spout. If you can stop the flow of water with your thumb, that means that the pipe inside is damaged.

5. Check The Roof
From the ground, examine your roof for missing/damaged shingles. Snow and ice can really do a number to your roof. If you do notice significant damage, you may want to contact your insurance company and consider replacement before the start of spring/summer.

There you have it, 5 easy ways to prepare your home for spring! Happy (almost) spring!

The Thermacore Collection At Overhead Door

We recently expanded our Thermacore Collection at Overhead Door! Learn more about these doors and if they are right for your home!

The Thermacore® Collection is Overhead Door’s line of premium, insulated-steel garage doors that are built with a continuous layer of foamed-in-place polyurethane insulation sandwiched between two layers of corrosion-resistant steel. This construction method, along with in-between section seals, provides maximum thermal efficiency. Properly installed, Thermacore®doors have an R-value of up to 17.5. Thermacore® doors also feature a steel backing for a clean, finished interior appearance.

For homeowners seeking the look of a wood garage door but without all the maintenance, Thermacore® doors can be purchased with one of two realistic, bi-directional wood grain color finishes – in Walnut or Golden Oak. The Thermacore® line also features nine paint finishes, including recently added Black and Gray, for a clean, classic look that will make a home stand out. 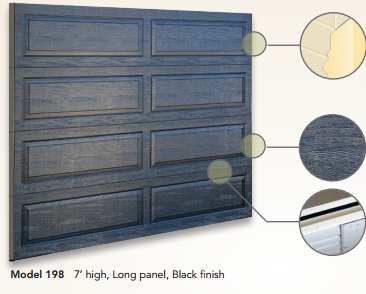 Thermacore® doors can be further customized with a range of window options. New to the Thermacore® Collection this year are Stockbridge windows in 2-3 and 2-4 configurations, and Stockton windows in 2-4, 2-6 and 2-8 configurations. Each window option features thinner mullions and less plastic material around the perimeter to provide garages with increased natural light.

We're more than happy to help you find the best garage door for your home!

This year, Overhead Door celebrates our 95th Anniversary!  Learn more about our founder, C. G. Johnson and his many contributions to the garage door industry.

In the early 1900’s Henry Ford unveiled the Model T. This automobile was affordable, reliable, and had country roads and small towns in mind. The cost of the Model T made it affordable for the majority of the population. This boom in the automobile industry led several other car makers to start producing affordable cars, which made for even more car owners. With so many Americans now on the road they needed a place to store their newly purchased vehicles!

Carriage houses, originally meant to house horses and the carriages they led, had a new addition: the automobile. Eventually, carriage houses were phased out as more and more people purchased vehicles, and were replaced with garages. Early garages had side-opening panel doors which worked, but not in the most convenient manner. Seeing that these doors required double the amount of space to open, C. G. Johnson had an idea. In 1921 Johnson patented a sectional overhead door, and with that idea, a corporation was born.

To showcase this new invention, Johnson traveled to fairs and expositions with a prototype door attached to his Model T. With the help of new marketing tactics such as customer coupons and community bulletin boards, Johnson quickly established a network of distributors. Five years later, Johnson brought another invaluable piece of technology to the industry to help those who could not manually lift their doors: the electric garage door opener. These two inventions laid the foundation for Overhead Door Corporation, which has continued to be a leader in the industry!

If you have an Overhead Door garage door, we'd love to hear what you think! Share with us by commenting below!

How To Protect Your Pipes

Despite these warm temperatures we've been enjoying, winter weather will be here soon. Unfortunately, with freezing temperatures come busted pipes…and costly damage. Find out how to take preventative action to protect your pipes in the cold weather!

At The Overhead Door Company, we're always looking out for you! Whether it be organizing your garage, protecting your home, or preventing frozen pipes, we're here for you! Think of us first for all your garage door needs!
0 Comments Click here to read/write comments
All Posts